We arrived last night around 9:30PM. 12 hours of travel time which for Melanie was quite cushy in a seat all to herself in the front of an SUV. For the three of us crammed into the back seat with minimal air conditioning and leather seats that were not so great at absorbing leg and butt sweat…less enjoyable.

We made it though. The roads from El Salvador were passable. Better than the road from Antigua. We crossed with ease into Honduras and were on brand new paved roads all the way to Choluteca. For these being poor countries, This was some really nice road. The driver was able to explain to us that we would soon come across muchas bachas. With some hand waving and animation, we understood he meant bumpy.

The other side of Choluteca, and all the way to the Nicaraguan border…bachas we now know means pothole. Not little ones, but big ass ones. Pequena piscina, or a small pool. Our driver didnt speak any english again and we were 4 travelers in the car trying to understand and get our point across…me being the strongest Spanish speaker…also armed with an offline translator. I am not a Spanish speaker. 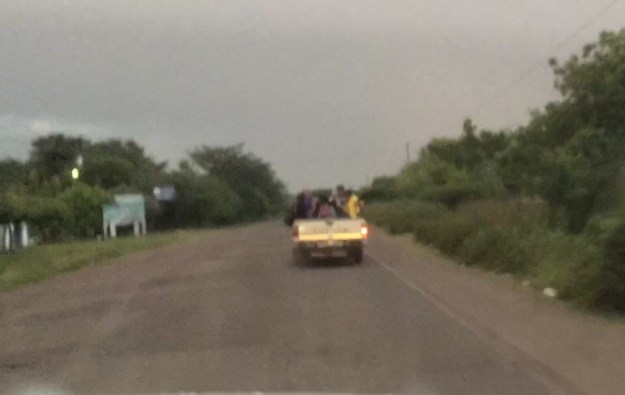 So many hours of dodging and weaving through the holey roads, first in the day, then in the rain with lightning in the distance, then at night. Vehicles on the roads with no tail lights. Pedestrians without reflective gear. Bicycles and motorcycles all without lights…it is amazing at how people survive on these roads with all the fast and erratic drivers navigating the roads.

We made it to the Nicaraguan border and after already doing three of these crossings with no problem…the last should be easy. Nope. We arrive. The bags have to come out of the car to be scanned. We are also asked to pay an additional entrance fee, even though we already paid our driver…who was now no where to be found. Our 4 passports went to a lady and she disappeared into a back room.

Que pasa? 10 minutes goes by and we are still standing there, now with our bags, no passports, and as many mosquitoes in the place as there were idle customs agents probably playing candy crush or watching cat videos on their phones. Another 5 minutes and our driver shows up again. He tells us it might be an hour for them to grant permission for all of us to enter the country. This is strange, and the Kiwi girl with us is becoming irate saying she has never encountered this kind of slowness before and how unacceptable it all was. 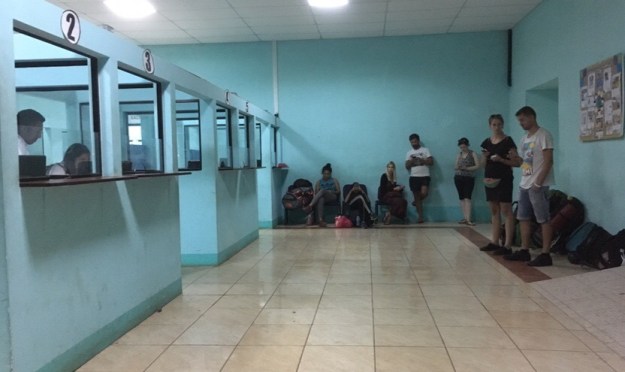 6 mosquito bites and 30 minutes later we heard some stamps being firmly impressed on some documents and our driver was able to collect our passports . Vamonos! We were off. 110km per hour down pristine highways with the only slowdowns being for occosional vehicles with no taillights and we made it to our Airbnb…only 75 minutes after the best case arrival estimate.

The rain started. The street was empty, other than for a toothless, and very helpful, woman who was quick to cross the street and start pounding on doors to get us inside. Guess what, no answer. I traded messages with the guy a day earlier…but no answer. 5 minutes of buzzing the doorbell. The dog inside barking like crazy. No connection to the wifi because they changed the password inside, but not on the airbnb host details. So there we were, on the street, looking to assess what an alternate plan might be.

A couple of girls inside finally got tired of all the racket and came to the door to ask what was up. Upon explaining we had a reservation…they explained the host lady was in Spain. The host guy was no where to be found…and they were only guests, so they were not aware of any details. They of course are not about to let some persistent strangers into their walled compound after dark without good reason as well.

I was able to pull up the airbnb reservation. Mention that Enrique should have been aware of our arrival, and that i was getting no response from either him or his wife…so they let us in. We found our room. We were hungry and thirsty. The listing mentioned cold drinking water and fresh fruit on arrival from a friendly host and we got no host, no fruit, and were told the water from the tap might be drinkable.

Too tired to find other options…we slept. In the morning, Enrique apologized profusely and gave us 20 bucks…essentially making our first free. He mixed up our arrival time went out for the night. My guess is he will get more of an earful from his wife than from us, as this place has stellar reviews.

I apologized a couple times to the scared Norwegian girls this morning. A couple of hangry Canadians just looking to get inside after a long travel day can be a bit daunting.

One thought on “The road from El Tunco to Leon”