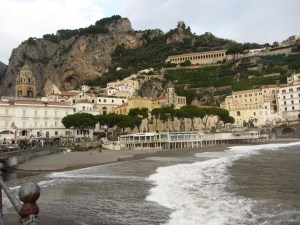 If you're looking for us, we're somewhere on the hill in the upper left

A rainy day here in Pogerola.  The storm isn’t so much ‘brewing’ as it is more fully underway.  Thunder and lightning rain down on us while the stairways that lead out of this mountain hideaway have been converted from passable walkways into impressive water features.  They said a storm was a-coming…but this was something else.  The few groceries we have are enough to carry us through today, maybe tomorrow morning, but if we’re hunkering down for any length of time, each one of those bran flakes will need to be put on rationing lockdown.  The power has conked out half a dozen times and thundering booms only milliseconds after multiple lightning flashes.  Pictures of raindrops couldn’t begin to tell the story, and I am not ready to splice together enough footage to make you feel as if you were there…so just a few words to say it was impressive.

This of course means we’re a little housebound.  Not such a bad thing after yesterdays adventurous descent from this nest among the hills to the historic port of Amalfi.  They say 1000+ stairs down via Sopramare to get down the steep hillside.  What they don’t say is how little travelled this staircase is now, or that during the fall season the potential for slipping hazards with decaying olives and windblown branches littering the rocky steps.  We’re you’re half way down though, it’s a little tough to turn back. 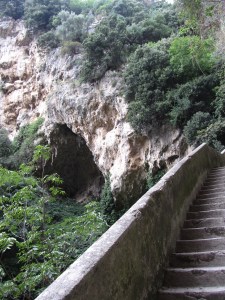 And down you figure is not bad.  Easier than up…right?  Definitely not.  Each step is a little more precarious than the previous one.  After a steady 20 minutes of descending slowly, the legs start to get a little wobbly and calves a little burn.  Sure, it’s good for you…but maybe a little tough after a full day charging through the hills of Capri in order to make a ferry on time.  Nonetheless, we’ll give that stair descent a chance to dry out a little before tackling them for a true count.

Dinner, was in a little local haunt known as Gerry’s Pub.  Not a lot of options for food up this way, and up to this point I have insisted that each meal be ingested at a new establishment.  Hey, we’re on vacation, and out to experience what we can…dining establishments as well.  This pub isn’t your typical eatery though, with a few wicker chairs around small wooden tables filling a glassed in deck area in behind a well stocked bar.  A throng of young boys frequent the place,  and switch up smoke breaks on the back patio with clustering around a new poker table for a few hands.  Further decoration includes a single slot machine, one 80’s build arcade game, and a pulsating coloured light show which dances across the ceiling for ambience…in sync with more 80’s soft rock tunes, and finally a local patron seated in a dark corner waiting for something.

Upon our walking through the door, the stares we received were priceless.  Who were we…and why were we there?  It was almost as if I was expected to pull out a ray gun and insist everyone be beamed up to the mother ship for rectal inspections.  The proprietor was quick to show us to a table, and then nervously drape a table cloth before setting cutlery and napkins.  The music suddenly reduced in volume and switched to something more jazzy, maybe 50’s classics, and dance party lighting went down in exchange for some mood lighting around these curiously vacant tables.  It was Saturday night, 9PM, isn’t this when things get going?  Two menus were presented to us with ‘English’ clearly written in white-out across the front.  Inside were the hand written scrawls of the edible offerings along with descriptions that varied from menu to menu.  Melanie was adventurous and ordered the Ravioli Gerry’s, while I attempted a pork chop in some green pepper sauce and to our surprise…very palatable.  Crunchy bread that put popcorn second as far as recommended snacking foods.  Interesting home cooking, however they don’t advertise the ‘interesting’ part on the sign out front. 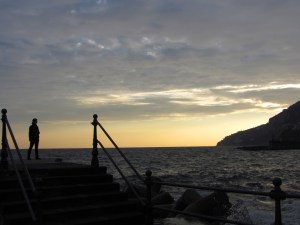 This is a woman about to karaoke

Being as we were ‘different’, Gerry himself decided to sit and chat for a while.  Another former lounge singer, playing in all the hotels along this stretch of resort towns with his favorites being ‘Mack the Knife’ and ‘New York, New York’.  A guy that went the way of the restauranteur to make his way as the music gigs started to dry up.  A guy also sharing his desires to hand off his seasonal bar/restaurant for something more music focused.  Before long, Melanie was volunteering her services as a vocalist and instead of heading back to this quiet little place, the karaoke was started up.  ‘Hotel California’, and some ‘I Will Survive’ filled the air and even a few heads popped in to find out what could possibly be happening inside.  A mini congo drum was pulled off the wall and set up next to a sink for a full impromptu drum kit, with swizzle spoons taking the place of drumsticks and a tambourine for the cymbals.  Pass the maraca to that lonely stranger in the bar and you have a full spur of the moment band.

You make do with what you have…and in this case all part of the trip…right?  It may not be exploring uncharted territory on a merchant ship a millennia ago, but we’ll call it adventure.

One thought on “Storm’s A Brewin’”