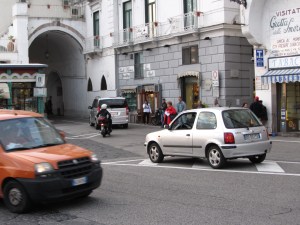 Yeah, that car is parked in the painted median

Italian driving.  Should be enough said right there.

Our last experience in Rome was a bit of an eye opener with fast cars, clusters of darting vehicles at roundabouts generally all pointed in the same rotational direction, and pedestrians navigating between the moving cars.  You don’t see too many crosswalks going to the center of these roundabouts where a great photo can be snapped from, therefore whenever crossing a street the cognitive enhancing powers of an extra caffeine loaded espresso consumed in the afternoon is definitely required.  After a week of little traffic in Prague, the bus from the Naples airport to Sorrento, Curreri Viaggi for 10 euro, was a quick refresher on what Italian driving was all about.

Lines on the road which would normally indicate two way, or two lane traffic become 3 and 4 lanes.  An onramp to a highway is not to have the door-scraped cars pick up speed prior to merging with faster traffic, but literally funnel all movement into a single lane.  Parking on the side of the road seems to have few rules other than to make sure the mirror on the passenger side is in contact with either a building or cliff face. Blind corners can be manoeuvred around at speeds of 80km/hr, as long as you honk your horn a couple times.  And if the roadway looks too narrow with a bus coming at you, trust us, there is at least an inch of room on either side for the vehicles to pass. 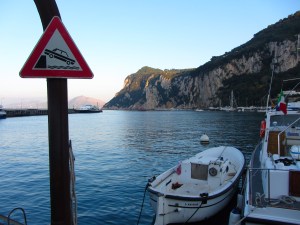 Likely a warning to drivers, not a rule

Now if you really want some excitement on a narrow road…open up a fresh fish market.  Cars line the streets on both sides of the roadway.  People fill the vacancies between cars.  The congestion converts this SS163 highway into a single lane of slow moving traffic for motorists travelling in two directions.  Consideration for traffic flow does not appear to be an Italian forte.  Neither is cueing up for the bus, plane, or train…with a first come, first served attitude.  Walking down the sidewalk almost seems to be a game of chicken, whether it’s a pair of strollers coming at you or a couple old guys caught up in some passionate discussion about who knows what.  One conversation we understood the body language of…and only from witnessing the backstory, was one guy arguing the fine levied on him for not having a stamped bus ticket.  30 euro is the penalty, which I am sure this senior wasn’t ready to pay up without any kind of hand-waving argument with anyone wearing a SITA bus uniform.  The poor guy was constantly directed from one individual to the next…and it appeared ultimately to the bus maintenance shop down the road. The man who drives this has no confidence issues

With the passionate drivers in this country and narrow streets there does seem to be some sense of cooperation though, as automobiles do continue to flow somewhat effectively from east to west.  Summer is a different story when tourists clog the single vehicular artery through here, requiring provincial lawmakers to enact rules for even numbered local license plates one day, and odd the next.  If you ever decide you might want to rent a car and try out these roads…think again.  If your rental car was ding-free, it wouldn’t be by the end of this trip…and even if you were lucky enough to keep that car intact, I am sure your nerves would be completely fried.

Relax.  Take the bus.  Soak up a little scenery and develop a healthy respect for what a skilled bus driver can do.  Here’s a few minutes of the trip from Positano through Praiano.