Not sure if it was the excessive rain pounding on the roof all night or the excitement of a new day. I didn’t sleep past 5:30 this morning, which was likely going to make this a very long day. I tossed, turned, read a couple news articles just to stay up to date on what might be going on in the world…and when 7:00 hit it was time to tap and tug at Melanie like a cat that needs to be fed. I was hungry and the buffet style breakfast was starting to be served.

She sleepily agreed, and started preparing herself for the day. I opened the curtains to the central courtyard and people were all milling around out there with phones pointed in one direction. I knew there were sloths around, could they be out this early? I slipped on some shorts and a shirt, then slid open the patio door to exit the room. Outside was not wildlife, but a clear view of the elusive Arenal. Melanie opted to get ready first before leaving the room, something about only being a few minutes and needing to get her hair under control. In a few minutes…the volcano was shrouded in clouds once again. At least I got one picture of it while in La Fortuna. We were ready to sample the buffet breakfast our host Alejandro, from Puerto Vallarta, had hyped the evening before. We arrived to many of the tables already filled with German and Dutch travellers. I grabbed a couple of plates and headed over to the table of food to find…everything picked over. Scraps left and it was only 8:00. Tired watermelon chunks mixed with papaya that nobody wanted. Fried sausage-like chunks that didn’t belong on anyone’s plate. A few scraps of egg left stuck to the sides of the chafing dish. This might be a lean morning meal for both of us. The coffee and juice was plentiful though and we did load up on that. We sat and enjoyed the cloudy volcano, then packed ourselves up and into the car.

On checkout we did get to see a sloth perched high in the tree outside reception. Poor lighting conditions, and the fact the animal blends in so well to the tree eliminated any chance of a decent photo, so we just stared at its butt for a few minutes. Eventually there was some activity as the treed creature looked over its shoulder and down at us with what I figure had to be a bit of a disgusted look. Daytime is for sleeping. The chatter we were making below was not helping with any snooze.

We hopped in the car and started out on our way to the east coast. 9AM on the road. A missed turn at Tanque was quickly corrected and we found our way down the 4 to Guapiles…and then on to Limon. This is a fairly busy corridor as everything in this country seems to be shipped into Limon, then transported by truck to San Jose. We have not seen a train or set of tracks anywhere on this Central American trip yet. That is probably also why so many goods end up being expensive here. We got to Limon and thought we might have lunch, however the traffic was crazy and venturing into just the suburbs of the city was enough to turn us off of heading in further. We opted to just head south to Puerto Viejo.

Lunch was in the little town of Cahuita. We grabbed a couple photos, then sat down at a restaurant that had a couple TVs showing the Hungary vs. Costa Rica friendly football match. People were glued to the play. We sat and chowed down on a very large plate of chicken nachos…with no interest in the game. The waitresses also didn’t seem to have much interest what was on TV…or their jobs…because the nachos showed up quicker than the beer, and much quicker than the watermelon smoothie which almost arrived in time for dessert. We asked for the bill and quickly departed the restaurant and town. A cute spot, good for lunch, but we had to move on.

We arrived in Puerto Viejo at 3PM. We checked in painlessly, no need to show passports or fill in useless registration information. We got the keys and wifi password, then were off. Being as we still had the car until tomorrow morning, but no where to park it, we thought we might just as well try to check out some of the recommended neighboring towns suggested to us by others we had met along the way.

We headed down the road towards Manzanillo. Punta Uva and Cocles were first and we found lots of little restaurants and cabinas for rent all spread out down the road along the coast. So many tourists on bicycles though, and mixing these casual riders with the vehicle traffic was a bit of an obstacle course. I understand the need for bikes as all these businesses are so spread out, they would be difficult to visit on foot. The lack of lanes for the bikes, or even lines on the road, meant extra attention had to be paid by both myself and other drivers to keep everyone alive. No bikes for us.

We made it to Manzanillo. We expected more, but other than a few desolate restaurants and beach, this really didn’t look like a place we would want to stay. This was the end of the road, so we turned around and decided to check out Punta Uva. Again, a pretty little beach set up against palms blowing in the steady breeze off the Caribbean… but the dead coin sized fishes all washed up on shore were starting to make the place smell a bit like a fish market. Add some midday sun to those little corpses tomorrow and we probably wont be back there. In Cocles, we found three horses just hanging out on the beach. A nice stretch…but Puerto Viejo has easy access to a couple decent beaches which we will have to check out tomorrow.

With no place to park, I still had the option to return the car to National before 5. I just needed a little gasoline. The closest station around here is in Hone Creek, a good 6km away, so we booted it up the road to get fuel and return. We found the drop point for the car, stashed it in their gated yard and headed out for a beverage. 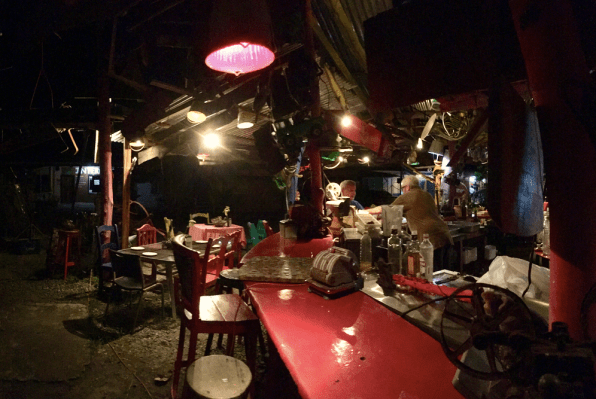 Right next to our accommodation is a funky looking place called Outback Jack’s. Tuesdays mean tequila is on two for one, so margaritas it was. We sat down at a table and within a minute our feet started burning. Tiny little ants were very unhappy with our location and began biting. We opted for the bar, which was a better viewing spot anyways. Jack was our bartender and it gave us a chance to find out a little about his story. Here was a grizzled old character that has collected a lot of junk over the years. That array, or disarray, of signs, old projectors, lab equipment, dead espresso machines, and painted horn instruments was strung up everywhere. Jack washed up a couple mugs for us in a greasy sink of water, then handed over a tiny pitcher of margaritas. Sitting at the bar demonstrated the less than stellar cleanliness practices. We crossed our fingers there was enough tequila in that pitcher to sterilize any bugs, and drank those limey beverages. No salt rim though. Either he had forgotten, or couldn’t find a scuzzy sponge to wet the rim. We paid and left. We didn’t want to chance food.

We wandered in the dark to try and find something to eat. Many places are closed on Tuesdays, so we ended up at the Bikini Restaurant. Sorry, no bikinis in the place. The waitresses did have skin tight dresses on though. We ordered a deep fried sushi roll and Thai curry that was so spicy we instantly broke out in the sweats. Maybe not the best of meal choices, but it has been a long day and we were not interested in more rice and beans. Melanie had a blended mojito which was fantastic, and I a reasonably priced caipirinha. Bellies full, we headed back for the night. We can explore more tomorrow in the daylight.

We covered a lot of ground today. We should sleep well tonight, especially if the neighbors stop screaming at each other. Earplugs will solve that. Tomorrow, we will see more of this little town…unless those dodgy margaritas come back to haunt us. So far so good.