Melanie swears the dogs were howling at the moon last night. The dirty fluffball of a dog next door seems to never stop yapping. Howling…I wouldn’t be surprised. I seemed to sleep through that portion of the evening.

We arose at 8AM. Breakfast and getting ready was a little slower since we had only to give our exposed skin a break from the sun today. Lucky for us, high cloud was above occasionally blocking out those rays and rain could be seen in the distance from our new top floor apartment. The water view is not much, but compared to the dark room we have been in for the last few days…this is a treat.

We did have a few tasks to accomplish. Money needed to be taken out as our cash was dwindling fast. Drinking water was needed. Our accommodation needed to be confirmed for a few more nights. Trading emails with the owners is easy enough, but the broken english seems to cause more confusion than clarity. We have been paying $45 a night now for the last 5 days and they are more than happy to continue that discounted rate for us until the 28th of November. Now just a matter of confirming…and paying cash if we had to.

We departed the room with an empty 5 litre bottle with us. My mission was to try and find one of the rare refill stations in town. Jamie, the lady here coordinating check ins and cleaning, said we had to buy water from the store. That today was the fall back plan, because with a little careful recollection I might find that refill station we saw 4 days ago down some desolate road. We headed up the road, pulled money from the bank with a hefty 5.25USD surcharge, and found that most northerly avenue in town. Half a block down from the Sweet Love Tea shop there was a refill station stating any size refill for 25 cents. Even if I lost a quarter in this old machine, it was worth a try to see if we could get a much cheaper water source than the Chinese grocer on the corner. Bottle went in. A quarter slipped nicely into the coin slot. I pressed the button and like magic…water slowly filled the bottle. Then stopped about 1.5 litres in. I didnt notice a size of bottle setting, so another quarter and we extracted 3 nearly free litres for our use. If I had more quarters, we could have topped it up, but today…this was already a minor win.

We marched our money and mostly full water jug back to the room to drop off our winnings. As we went by the bank, an alarm of some sort was going off with gringos all lingering around outside.. Never did figure out what was going on, but we weren’t going to stick around either to find out. We dropped our goods, sent another Paypal payment to the landlords here for another 3 nights, then it was time for lunch.

Now instead of wandering the streets to all the same restaurants we have been eating at for the last few days, today I thought we could try something different. Why not hop on a boat and ride around to a spot on Carenero Island for both lunch and a short beach day. Carenero is the dirty little island we visited a few days ago in search of accommodation. Melanie swore she never needed to go back there, but with others recommending the little beach on the island…maybe she would check it out. We found a water taxi, paid the $2 per person for a guy to run us around to the east side of the island and drop us off at Bibi’s for lunch. We arrived, saw a tiny beach and strode over it to the restaurant at the end. We were not excited about the beach, so cocktails and lunch on the covered patio was a great alternative to fighting for space on the scrap of sand. 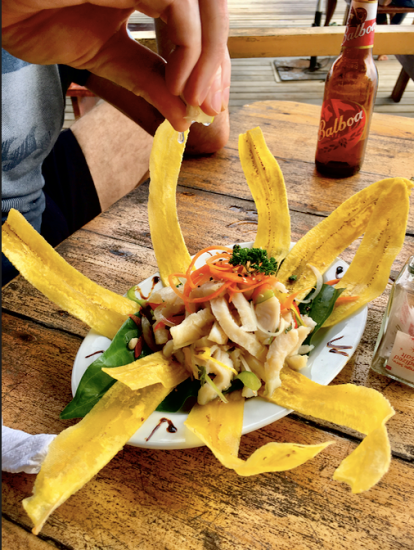 After an order of grilled chicken, nice big pile of ceviche, a couple beers and a passion fruit margarita the German couple that we shared the shuttle with yesterday showed up. We traded hellos and continued to enjoy the view from the over water deck. They were friendly, but today they had their own German friends to hang with so we weren’t going to budge in on that dynamic. We asked for the bill and started to head out. While at the bar running the card, the German guy came over to get a beer from the bartender. We told him we were about to go for a quick dip in this little beach stretch, at which point he says NO. 5 minutes more that way is the beach!

Well that was a relief. Maybe there was more to this little island. We thanked him and headed north, through front yards, past doorsteps and along the rough and sandy path. We rounded a corner and there was a nice long dock and small stretch of sandy white beach. Not the nicest beach we have seen, but this would do for today. It was now late enough that the palm trees aided the clouds in shielding us from the sun…so time for a swim.

We bobbed around in the waist deep water for an hour. The water was warmer than the air…definitely not the best spot for cooling off, but still very welcome. We got chatting with a Swedish fellow, there with his Italian wife and son. Apparently they picked up and moved to Panama as part of a lifelong goal to try living in Latin America. They now live in Panama City and have for just over a year. They aren’t super happy with their choice of places in the world to move to, but after a year of settling in they wanted to give it a fair shake. Panama may be slightly Americanized, but it is still Central America…corruption, poverty, poor infrastructure…all still very present. Before long they plan to move back to Torino, Italy for another new start. With the bugs starting to bite his Italian wife…it was time for them to move on. We followed suit shortly after them.

We walked our way around the island to the Aqua Lounge hostel for a water taxi back to Bocastown. The sandy path led past houses elevated on stilts with no windows and debris littering the ground. Clotheslines were strung up, and loaded down with many, many pairs of jeans. Little kids would come running up asking for money. We weaved our way through the houses and businesses to our pickup point and jumped in a boat. Carenero can be considered done, however we never got to the Cosmic Crab…so maybe not quite done.

Upon returning, we changed and headed into town for dinner. The Swedish guy suggested a restaurant they were going to tonight, but we wanted something simpler and quieter. Their offspring, Sebastiano, seemed to have a bit more of the energetic Italian in him than the passive Swede…so a peaceful meal was likely not in their future. We wanted one. We stopped at Buena Vista and enjoyed a chicken enchilada and brownie parfait amongst the 2 other tables in the restaurant. A nice wind up to the day.

The plan is for a tour in the morning. Hopefully the weather holds up, and the pinkness of our skin subsides enough to handle more sun. If not…then there is always the day after.