The alarm woke us at 7:30. Opening the curtains showed us that to the west was nothing but rain on the horizon. Probably a good thing we have this upper level “water view” unit to watch for weather on the horizon…now which way is that rain moving? We ate our breakfast and readied ourselves in case the precipitation was headed away from us. In addition, we checked satellite maps and hour by hour forecasts…maybe we would be OK. 8:55AM we departed for the Coconut Hostel.

We arrived to pails full of empty beer cans. Saturday morning at a popular hostel is not a pretty sight. Plenty of zoned out bodies laying around, likely nursing hangovers…waiting for some very rough breakfast to be prepared. The guy normally seated at the desk all hours of the day was making toast over some hot coals. He acknowledged our arrival, stopped his toast making and moved back to his usual desk spot. “How can i help you?” We outlined that we were ready to depart on the trip today…the one that leaves in 20 minutes. Ah…yes…he then asks for $20 each and we wait. Rather than wait in the dingy inside with pallets for sofas, we waited on the street. Brighter, more lively…and we didnt mind standing for a bit.

Another gentleman showed up. Not a guy that looked like he was going on the tour, but a handler of sorts. Upon his arrival, our money taking guy realized he was supposed to ask for $25 each. We were standing next to the sign that said $25…so paying $20 a person seemed like we might be getting the Saturday morning hangover deal. We paid the balance and were whisked off by this new gentleman to the docks typically reserved for water taxis. Melanie climbed into a boat and suddenly we were on our way. A private tour?

That was wishful thinking. The gentleman that brought us to the water taxi dock was to be our captain for the day. We steered the boat to a nearby hotel and loaded another couple women on board…then we headed around the north end of town to a dock next to the Bookstore Bar…but no one to pick up. Maybe just the 4 of us then. Nope, back to town and that same water taxi dock where another 4 bodies climbed in…and a return to that dock on the north side to pick up 3 more that hadn’t gotten out of bed early enough. 11 of us in total…now ready to go? Nope, another return to the water taxi dock but now for ice and some hydraulic steering fluid. 5 minutes of idling…then we were off. 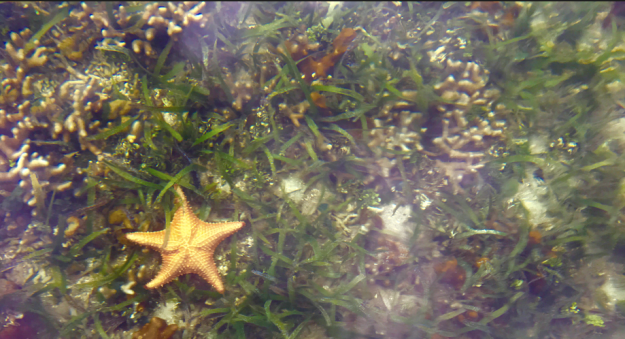 All instructions were given in Spanish, then an abbreviated version in English. We headed to Dolphin Bay, and there we found a dozen boats all circling around a few lonely dolphins just going about their day. 5 minutes later we passed through Coral Cay, which was a bit light on coral and a very short pass through. Crystal clear water, and I should have got some underwater shots that that point…but we were out and at full speed again before I thought of doing just that. Next was a place called Hollywood. Not sure why, but that is what was on the chalkboard outlining the tour stops. Here we could stop for a pee, a beer, and order our lunch…which would then eat when we returned. A quick pee break and we were on to los Zapatillas.

We arrived to dark clouds to the north and a wee bit of sun to the south. We might have to be a bit creative with the photos here to make it look as amazing as they did on Survivor. A few pictures and we found a nice little spot to hang our bags in a tree, sheltered from the light rain passing overhead. A hour and a bit for a swim in the overcast sky was pretty much all our skin could handle as we were still a bit burnt from a few days ago. We made our way back to the boat to find some lunch.

We arrive back at Hollywood, and were asked…snorkel or no snorkel? Well half of us were a yes to snorkelling and the other half indifferent. It was now almost 2PM and we really needed lunch. Peanuts were only taking us so far. Apparently we snorkelled now and postponed lunch, or we skip the snorkel and eat now. Lunch had to wait. We ventured a few minutes out into the water and a few of us jumped over the side to see what was undersea. Some small yellow and black striped fish, blue transparent fish, maybe parrot fish? I was never good at fish identification. I will leave that to my sister or nieces. The coral was small as well, colourful but not as intense as a reef might be. 20 minutes of floating around trying to get phone footage in a hopefully waterproof pouch and we headed back for lunch. 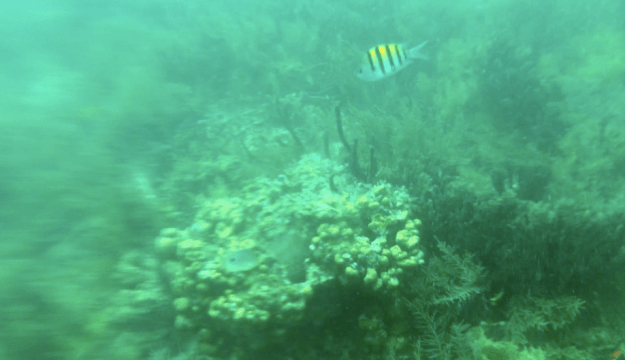 Lunch was late, and consisted of shrimp and rice for the whopping price tag of $15USD. It was alright for being prepared in a shack in the middle of the ocean. We headed directly from there to Sloth Island were we spotted a 3 foot sloth lazing the a tree 200 feet away. Not exactly photo worthy, especially with the sun directly behind the creature. We saw one sloth, which is better than most days they do tours along here. With that one slow hairy creature, we headed back to Bocastown. Tour complete.

After a rinse off of the salt, we headed out for an earlier than usual dinner of fish tacos and tuna burger…then headed back to our room. A few essentials grabbed from one of the Chinese grocers and in for the night. Not an exciting Saturday night for us, but it has been a long day.

We are sleeping in tomorrow…unless the weather is nice.