This is Day #58, and officially our 10th day in Panama and Bocas del Toro. We made it through the night with that thumping music ending sometime around 1AM. It took until 7PM tonight for them to get that boom box fired up again…meaning now we again are bombarded with now a Latin flavoured rap pop mix. Loud enough that we can’t overpower it with tunes in our unit. Welcome to Panama.

Despite the late music, we somehow fell asleep and sleeping in only lasted until 8AM. We have a few early travel days coming up so getting an earlier start probably isn’t a bad idea. Breakfast again was simple and filling. Our goal was to be out the door by 10ish in time to catch a bus to Playa Bluff…whenever that arrived and departed. Bluff is our favourite beach and relatively easy to get to. Since the sky was overcast and again rain expected at some point, heading out to a spot where we could potentially take shelter and watch the waves for a few hours sounded like a good plan. Big crashing waves are great to watch even if it isn’t sunny.

We headed out the door and to the park to find our ride. We arrive and a guy was quick to greet us and ask where we were headed. He assured us the Bluff bus on its way and would be there shortly. We could have a seat and wait. We took the guy’s advice and hung out for 10 minutes waiting for the van to arrive, then another 20 before deciding to depart. It may sound a little painful, but the park is a perfect place to just hang out and people watch. Native Panamanians hailing taxis to haul a load of plantains. Little kids running about parentless. Tourists riding rented bikes down the middle of the low traffic road. We could spend all day there if there was only a cushion for these cement benches. We departed for Bluff. Just Melanie and I for fares on this ride, not so profitable for the driver. We wound our way through town, out of town, and up the east side of Isla Colon to Bluff. Our bus was really just a worn down minivan in desperate need of suspension replacement. The potholes and sand driving is really hard on this vehicle, which is probably why all the taxis in town are 4×4’s. As long as it got us there and back, we would be happy. 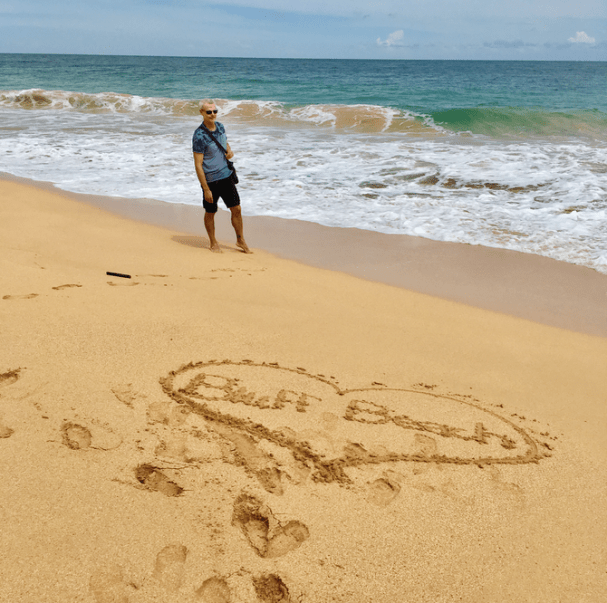 We got dropped off at the Island Plantation and made our way to the water. The last time we were out this way, we got dropped at the south end of the beach and made our way the 2km north to this spot. Rather than repeat, we could just start here and venture further north, which is what we did. The cloud cover was dense today, with a few spots of blue sky. We needed the coverage as Melanie was still a bit pink from a couple days ago. Can’t have her get too brown now otherwise no one will recognize her when we get home. We continued up the beach for a half hour, then turned around when it appeared it might take another hour to make it to the north end and back. All told, this beach must be 4km long…and lovely. It was time for lunch anyways. We found a small table beachside and ordered a couple drinks, split an overpriced shrimp wrap and then settled into some beach chairs to enjoy the afternoon relaxing in the shade of palms and some very broad green leaves. I went for a dip in the crashing waves. Warnings are posted everywhere saying no lifeguard is around, so swim at your own risk. A few days ago there was no problem, but I waited for a few others to float their way out there to ensure no riptides were sucking people out to oblivion. Easy enough to dive into the first wave and come up in water just deep enough to float through the next few waves, however I was quickly swept down the beach to a point a little rougher. The next wave in crested a bit soon and I was tossed around like a rag doll…sand in my shorts and hair. That might take a while to rinse out. I tried a couple more waves…got bounced around then exited for a drink of water. One more try a few minutes later. In I went at an easy point, rode a couple waves but yes…swept down the beach and tossed around in the crashing waves. Alright…not so much of a swimming day. The sky was clearing though, so maybe best to just sit back, dry off and enjoy the rest of that warm beer.

We enjoyed one more beverage while watching the sun tanners slowly turn pink themselves, then caught our beat up van back to town. 25 minutes later we were back at our room rinsing off and ready to seek out a little water and dinner before nightfall. The water was easy, since all I needed was a jug and a quarter. Dinner was at La Bugita and was a nice little wrap up to our stay here. A dessert of what they consider to be artisan coconut ice cream with some chocolate syrup, then we were headed home for the night. Now we just have the music from next door to subside and we can get a few solid hours of sleep before heading back to the border. Hopefully all is still running smooth on the Panamanian side, because I just realized it is their Independence Day tomorrow. I guess we will see.