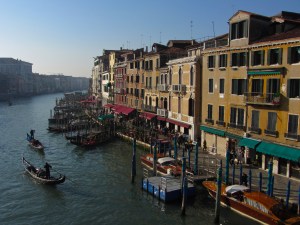 Surprise change of day trip today.  Instead of heading west to Milan, we opted for the less expensive eastbound train to Venice.  Budget has to factor in somewhere.

It is different arriving in a city such as this where we already know the layout from last years three day stop.  No time wasted in identifying potential points of our interest, and travel options to get there.  No rich exhaust from cars or scooters.  No crosswalks or signals, and no bicycles.  Truly a pedestrian city, with a few boats to move people and supplies about.

The vaporetto beckoned with its foghorn like call, but we opted to walk once again.  Six hours is all we budgeted for with train tickets defining the beginning and end, so strolling the streets in search of a few goodies and coffee seemed like a better option than reshooting many of the pics we took last year.  Plus, you all are probably getting tired of all the great photos showing sunshine an blue sky.

Wandering through the streets we found several restaurants with waiters trying to convince anyone and everyone to take a seat alongside the canal for a very pricey plate of fish or pasta.  With the streets this empty, everyone still needs to make a few dollars.  We’ve done that canal dinner once before, and that was all we needed, so we opted for some rather tasty heated sandwiches and the all important hot wine.  Wine that is so tasty that once again I am wondering why not carry a thermos of the warm spicy purple elixir at all times.  Party idea anyone? 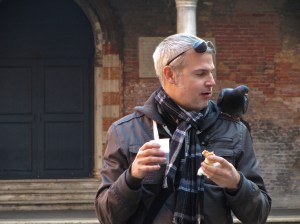 "You want a piece of this?"

The sandwiches weren’t bad either, and even the pigeons know it.  Apparently I got off lucky with only a couple dozen birds surrounding me for a few scraps of bread.  No fear here from these rats of the sky.  We passed a couple guys seated that at one point must have been enjoying their lunch.  That was until the motley collection of pigeons and gulls started tearing into one guys lunch bag, also shredding the bag of chips he was holding.  To share a little of this avian attention, guy number one decided to empty the contents of his snack food bag over the head of his buddy resulting in a new definition to ‘tarring and feathering’.  It made for a good photo op if anyone had a camera ready.  We skirted the mayhem and entered Saint Mark’s Basilica with no line…another benefit of visiting this place on December 1st.

December in Venice.  Decorative lights shaped into stars and stockings hang over the streets.  Lots of gift shopping variety.  Competition between shops and street carts.  Many half price items if you happen to get a little lost whole window shopping an end up well out of the way of the tourist masses.  We did well today.

Not all worked out though, as we did get burned on one coffee, one tea, and a croissant costing more than the 95 minute train ride, for two of us, from Verona to Venice.  Note to self…steer clear of any piazzas, viewpoints, or large collections of turistas when looking for a place to sit down and enjoy a cappuccino.  The waiter quoted another guy 9euro for a small glass of beer!  The American took him up on the offer and called over a buddy of his to sit down.  Amazing how some places can get away with such outrageousness, and not feel guilty about it at the end of the day.  It makes me not want to spend another dime in the place. 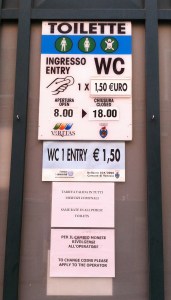 What I didn't capture was the cardboard sign tacked to the door with 'Chiuso' written across it.

Part of the reason for stopping was a chance to rest the legs.  The other part was to relieve the bladder.  There are points around the city to empty ones bowels, but with a 1.50euro price tag on entry into the stall with a wet floor and no toilet seat, it is easy to have that urge pretty much stop short.  It had been 4.5 hours since that last pee break, so I was beginning to feel the reabsorbtion of water just wasn’t happening fast enough for me.  We marched briskly in the direction of many WC stickers marking the way like a trail of breadcrumbs only to find the toilet was closed.  A puddle of urine, still fresh, was in the middle of the walkway… from dog, man, or a little kid that just couldn’t hold it we really don’t know.  Sure I could have done just the same, but Melanie gets embarrassed easily, and with the size my bladder had swelled to, I likely needed a few minutes to really enjoy that pee.  Maybe the extra charges for coffee and tea were worth it, or maybe I just need to pay that fee as a one of those costs for comfort.

Extortion for an afternoon caffeine fix, or pee break, aside…Venice still is wonderful.  If you get the chance, I still recommend it as one of my favorite stops just for the peace and quiet.

One thought on “Verona to Milan? How about Venice?”