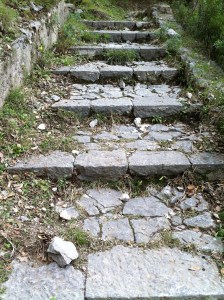 This morning’s coffee is being savored, as it means we are in no rush to get out of the house for another day trip to a cute little town along the Amalfi coast. A day of semi-relaxation planned, which will include less than 500 stairs to climb up or down and maybe a little time to enjoy the patio before the dreaded morning out of here. We have an excellent spot here to hole up for a week, but getting in and out can be a bit tough. We did have a ride up to the door on our way here, thanks to the son of this vacation apartment’s owner. Our way out will be on our own though, with almost 200 stone steps upward into the center of Pogerola, to take us to our SITA bus pickup point.  Yeah, yeah…whine, whine…

Might I note that after six days here we might, just now, have an idea of where to catch the bus. Yesterday was full of good intentions to preserve our energy and catch the bus down into Amalfi, but no…apparently we were standing about 200 feet away from the actual pickup point (around a corner, so we couldn’t see a damn thing).  Missing that bus meant one of two things…let our day passes expire, relax for the day and write off the cost as a learning experience, or hike down the 700+ steps down into Amalfi.  In an effort to preserve the remaining hours on those travel vouchers, we took on the knee-jamming task of another day of hiking. 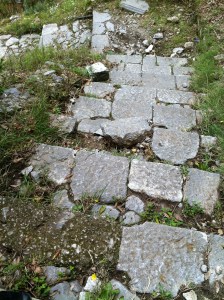 These could use a little work, when the maintenance guys are ready of course

In this region, there are literally thousands, if not millions, of stone steps connecting these little towns.  Sure hiking down is easier than up, but we’re now averaging more than 1000 steps per day here.  Equate that into building stories and we’re talking about 70 floors worth of steps to descend.  Now imagine that staircase was built a couple centuries ago, possibly overgrown with some moss, and littered with decaying olives and nearby deadfall.  Maintenance is also a bit lacking on these paths, as the villages would need to come up with the funds for repair…and when it’s a choice between roads and parks vs. a rarely used path..you can see where the priorities are.

One of our drivers was commenting on the downfall of the Italian economy, his view anyways, was that too many kids went off to school and became dentists, doctors, and lawyers instead of the productive trades that have always kept the economy lively.  The professions are now having some difficulty in finding work, however if more focus was put on sending tourists down these ancient paths in poor condition…all of these professions would likely see a seasonal surge.  With the dentist, I am obviously not referring to your standard cleaning with a fluoride treatment.  I guess lawyers would just have to make someone liable for repairs, and the doctors could almost set up field clinics for the number to twisted ankles and heart attacks.  If this were 20 years ago, it might make sense to set up a 30minute photo developing booth next to a lemonade stand too.

So tomorrow we are out of here.  Calves of steel and thighs beginning to resemble some of those cast statues.  Belly still has a significant softness to it likely because beer and pizza, or the mountainous servings of tasty pasta.  The only items showing real wear are the wallets, treads on our shoes, and that cheap luggage purchased a few years ago.  Buy cheap, buy twice…right?  Or is that three times?

One thought on “Thousands of Stone Steps in Campania”