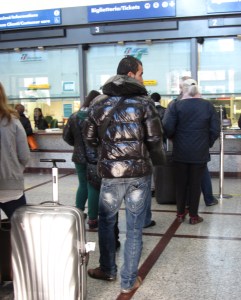 Stealthily acquired while purchasing our tickets to Nice. The faux-hawk is also alive and well.

Melanie was suggesting I take on a fashion blog.  Excuse me, but the hoody and jeans I am wearing don’t exactly make me qualified in the least to offer my opinion as to ‘what’s hot’.  She then asks, ‘How about making one about the random, sometimes stray, cats and dogs we seem to encounter?’.  Still not enough material there to occupy a reader’s attention span for more than 15 seconds.  Then it hit me…blend the two into one partially interesting article catching the attention of both fashion critics and pet lovers.  Maybe with the ultimate goal of capturing a photo of a feral dog wearing a shiny puffy coat.  Wait, I’m not a magician here.

Although we have moved on from the frigid temperatures of Northern Italy to Southern France, some of the trends in outerwear seem to tag along.  Verona was chilly, which required a thick outer layer to retain a little body heat.  Prague was similar, but Melanie’s observations suggest a tendency for the locals to don a felt based overcoat to maintain that core temperature.  In Verona, and throughout most of Italy encountering temperatures less than 10 degrees, fashion and heat retention has spawned the return of puffy coat.  Remember those down-fill ski jackets of neon colours that brightened the slopes and streets during the winter months when leg warmers and pastel jackets were too lightweight for the season?  It seems the trend may be back in full force, only now in classier colors of black, grey and maroon.  Seinfeld’s George had one of these jackets a good 15 years ago, which may be what started the trend here.  Maybe Larry David’s favourite costume designer was a pioneer in the day.  Shiny puffy coats…every teenage boy, hip young gal and older woman seems to wear one.  I just had to embed this link as a recap.

What is under these coats?  For the gals it doesn’t appear to be much more than a pair of patterned tights.  The boots are tall, heels high, and skirts short enough to not be seen under the bottom of that jacket.  As for what the guys might be wearing, who cares…it’s the gals that warrant the attention.  The attention that says ‘I am available’, or ‘I haven’t settled yet, and may be in the market for an upgrade…what’s your best offer?’.  It’s a different world for clothes wearing, and it’s likely because of our rather drab garments that few people start up a conversation with us.  I used to think it was the lack of colour in our skin… or maybe no cigarette in one hand and espresso in the other.  Maybe after 9 weeks of travelling we’re starting to look a little haggard and too scary to talk to.  I’ll leave you to be the judge from the photos. 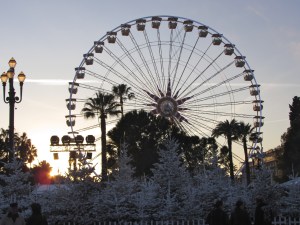 Now that we’ve crossed the border into French territory, a distinct lack of these puffy coats…likely because the daily highs approach 18C.  It’s early December, and feels damn near like spring.  Yes they are making an effort at a Christmas market here with real trees for sale, hot wine, cotton candy and a ferris wheel…but the fake snow and palm trees in the foreground likely won’t bring out similar coats  for a couple months.   We’ll need to do a little more exploration of storefront windows to see just what might be offered on the coat fashion front.  Don’t keep your hopes up for any updates when it’s still fine to walk around in a t-shirt and shorts though.

One thought on “The Return of the Puffy Coats”