Ah, December.  This of course means just over 2 weeks of procrastination from any specific shopping, and just over one final week to face the madness in the shops. 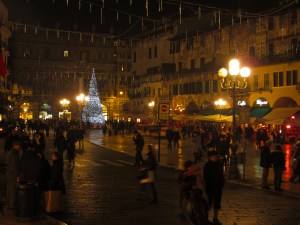 Here it’s a little harder to notice.  Either it’s an evening promenade down the two main shopping streets, or that similar rush is also starting here.  The big difference is the lack of Christmas tunes carolling at ear splitting volumes and the sound of constant jingling of bells from your street corner Santas.  The stores have made modifications to their window displays, but nothing dramatic and actually tasteful.  From simple ‘Buone Feste’ framed in red LED lights in a department store, to a hand-knitted carpet outlet with a Santa figure holding two throw rugs.  Nothing flashy or outlandish.

That nightly promenade that we became accustomed to in other small Italian towns now seems to resemble panic shopping.  Possibly the case, however here the end goal is for those wandering participants to make their way, strollers and all, through the narrow rows of shops to Piazza Erbe.  Here the dimly lit streets empty onto a plaza filled with fruit and vegetable carts, along with many gift-like goodies.  Ties, scarves, puzzles, fridge magnets…pretty much anything you could think of as being kitschy and overpriced for buying off the street is right here.  Florence definitely had better volume and prices, but only an hour away and according to census stats 100,000 people more.  Maybe it’s that proximity to Venice that jacks prices up, like the gelato theory.

Between stands and carts selling scented candles and snowy nativity scenes, the casual promenader can also satisfy that need for a little vin brule priced at 3 euro for a tiny little cup.  Last I checked, you could get a 750ml bottle of wine in your local supermarket for less than a euro.  Add to your hot wine some fried potato filled dumplings, with some prosciutto bits and onion, and maybe some not-so-Italian apple strudel covered with a lightly sweetened custard…and dropped 20 euro on food that your belly will process in 20 minutes.  Maybe those steaming roast chunks of meat, wrapped with a rye bun are the real deal…but no where on the 5 item menu is there a picture that looks anything like what they’re making…and English seems secondary to German here.  I think it’s ‘Schinken’ we’re looking for here. 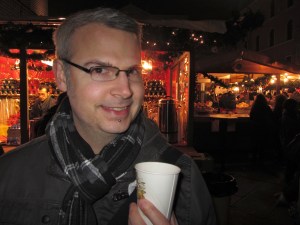 Hot Wine...must find thermos and reason to drink in public

Street food, chachkas, too many people wearing shiny and puffy coats pushing strollers…and the temperature has dropped to zero here. Darkness sets in around 5PM and the fog seems to blanket the city by 6.  It’s an eerie bustling of people through the streets that seems to keep this town alive in the off season.  It’s the regularity that is surprising, up early for breakfast and work, shut everything down for 2-4 hours in the afternoon for a long lunch, restart again later that afternoon and into the evening before going for dinner late.  Between finishing your day job and a late dinner hour, locals seem to be attending the cafes for glasses of wine and sweet snacks.  No sense spoiling your appetite for that 9PM reservation.

Sadly, we’re having a hard time adjusting to that routine.  Sure we’re up early and out of the room or apartment before noon for a day of wandering, picture taking and hot wine sampling, but finding a place to eat an actual dinner between 4 and 7:30PM is damn near impossible.  Maybe we should get back to those relaxing afternoon naps…you know, the ones that get away from you and turn from a 20 minute catnap into a 2 hour go.  At that point a full dinner after 8 would likely work, but we haven’t found that karaoke bar to stay out until 2AM at…and we don’t want to compromise another day of sightseeing with a day of recovery.  It sucks to be old…I mean ‘older’ of course.

One thought on “Naughty or Nice? No Santa to decide”