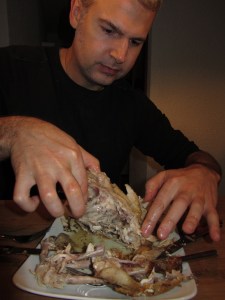 20 minutes after we found a roast chicken. No pasta today!

Well, we’ve made it out of the land of pizza and pasta. 5 weeks in Italy has now quelled any urge for a strictly carb based diet, consumed during Italian eating hours.   Now only another 5-6 days of trying to remember to reply with ‘Oui’, instead of the reactionary ‘Si’.

After a stint like this, we have agreed that it really is about time we take on learning of a few basics in Italian. Spending this long in a country and not even having simple verbage under control really is a bit sad.  When being asked something easy like ‘Caldo?’, there should be no hesitation and should register immediately that the lady rushing from customer to customer behind the bar is simply asking if I want the cheesy bread heated or not.  The cop-out option… to say, ‘no parle Italiano’… which is accurate…just isn’t acceptable any longer.  The reassuring part is that we are starting to pick up enough random words to possibly string together a sentence.  Answering a phone with ‘Pronto!’ and ending a call with ‘Ciao, ciao!’, could be fun if we still have anyone to call on the home side of the Atlantic.

It makes me think of a child learning to speak.  Only in such a context, there are individuals constantly teaching and asking simpler questions of the kid, as well as pointing out colours and nouns.  Mimicry is encouraged, and no one is asking us if we had fun today, or if I peed on the living room carpet instead of the dog.  We’ll have people in need of assistance conversing with us, whether it’s directions or simply helping to lift a bag onto a luggage rack.  Mimicry would be me breaking into my best Godfather accent, which I am sure these inquirers would either run or toss a little change at me fearing I need some serious help myself.  I know what milk and an apple are, possibly what the next stop is on the train, but even asking where the toilette is still consists of the shortened ‘Toilette?’ and some general handwaving.  All bits of the language that wouldn’t help any native speaker unless they just finished some custardy apple strudel and it didn’t sit well with them either. 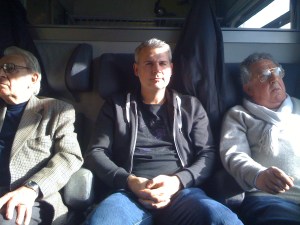 The guy on the left wouldn’t give up his seat for Melanie. Boys on one side, girls on the other.

I guess cavemen had similar means of communication. If one word would suffice in meeting your immediate needs, why would you need to learn anything more. It’s the women that made language more complex with those days stuck back in the hollowed out rock with the need to discuss their feelings and braid each other’s hair.  Men must have subconsciously picked up those newly developed words after passing out from too much good food…unless it was essential to prevent committing to something they didn’t quite understand in the first place.

Frustration should likely come from not being able to effectively communicate. Here it is nice though. Most Italians are friendly and talkative. You don’t speak the language, no matter…more hand gestures and repetition of whatever the word is and with a little effort a breakthrough.  The old guy next to me was talking about the sun, ‘sole’!  Not sure what the context was other than the fact that Milan was cold, grey and miserable when we were transferring trains.  That 4 hour train ride spotted with snore fillled naps and the occasional sulfur-laden gaseous emission, that could only come from one of three people, did have further breakthroughs though.  The old guy and I agreed that an ad for a proposed smart television was ‘bello’, with a couple thumbs up and smiles.  It also turns out that he and his wife were headed to Antibes, where they have a small house.  In addition, Abramovich apparently has a complex just down the road from him, including a 100+ meter yacht.  It was an interesting, and short conversation composed of a few English, French and many Italian words which we somehow pieced together.  Oh yeah, Antibes is apparently a very characteristic, authentic town…according to our cabin-mates.

They call it a language barrier, but really it’s up to each of us to make a bit of an effort at communication.  Sure not everyone is willing to take up the challenge of trying to communicate with a non-native speaker, but those that do may be thoroughly entertained with the challenge.  ‘Bello’, ‘si’, and ‘no’ just need to be built on.

One thought on “Ciao Italia! Next time we’ll chat more.”